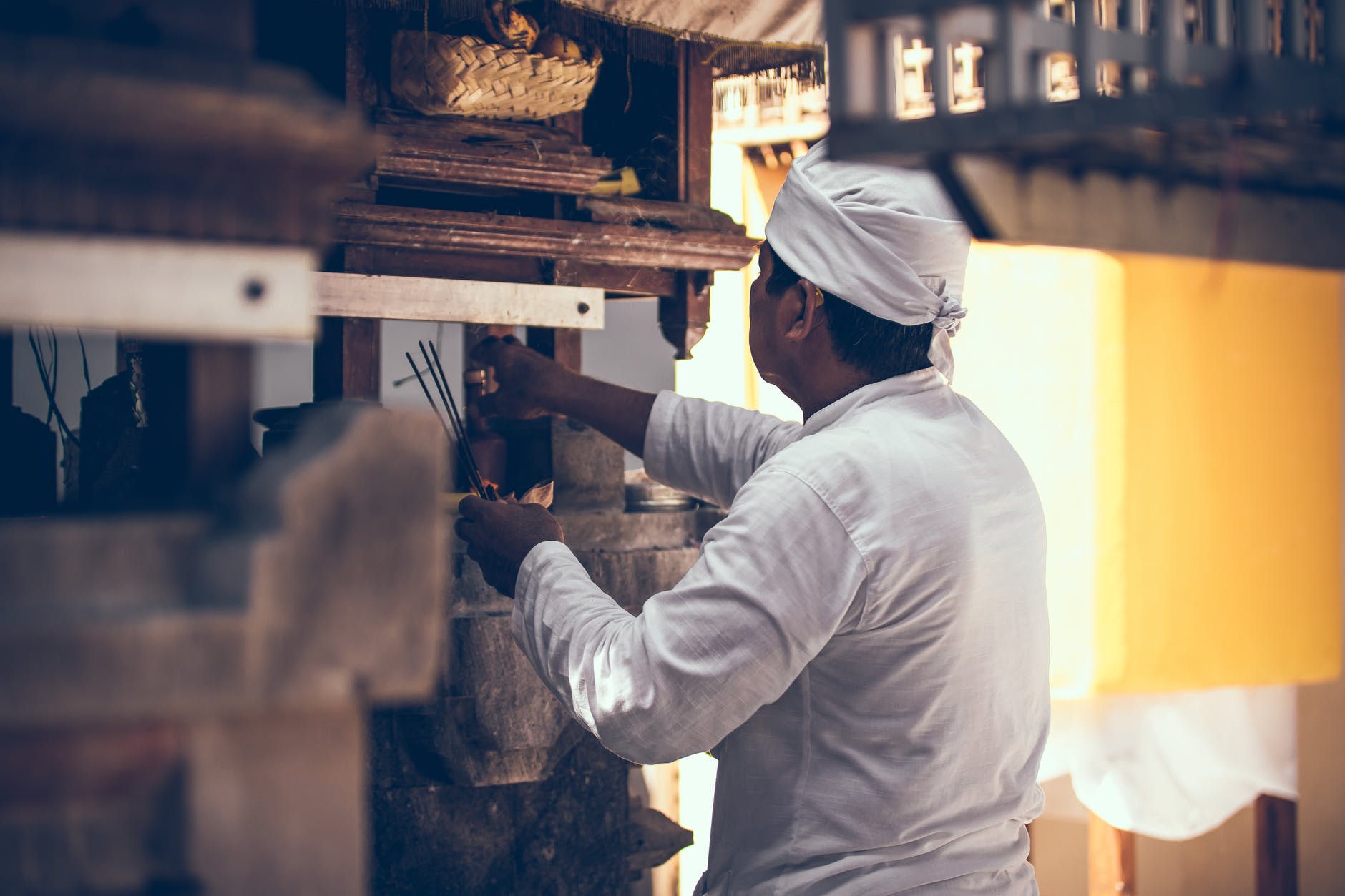 Why I believe Indonesian food is the best

Growing up with an Indonesian family

I come from an Indonesian family so you can imagine that I know all the amazing dishes. I know them so well that sometimes I dream about them. On all my birthdays my aunts were cooking for me and the whole family. The made things like satey, rendang, nasi goreng, gado gado and soto. Every birthday is a reason to come together and to enjoy a number of amazing dishes created by my aunt. It is always a great pleasure. As you may have noticed already Indonesian food is an important theme in birthdays. Two things are very important:

This is what is important for Indonesian people when the cook. It’s a mentality that you will see in many Indonesian families. They will always share, no matter how much or how little someone has. If you are going on a trip to Indonesia, this is certainly something you will encounter. Indonesian people just love to share something things they love with other people. Especially when it comes to food. I also notice myself doing this all the time. If I like something, then the person I’m with at that moment must experience the same. Whether he/she wants it or not. I want to share my happiness with them.

In Indonesia every island, culture, and every family have their own recipes. What they have in common is that they all think it is important that the food is good and tasty Indonesian, that everyone likes it and that there is more than enough food for everyone. Wherever you go in Indonesia, you will be amazed by the taste sensations and the hospitality of the Indonesian people. Go to Indonesian and taste a real rendang or satay! Preferably from a small stall on the side of the road. Believe me, you never want anything else anymore.

History and origin of Indonesian food

Indonesian or Indian? This is a common mistake. A lot of people aren’t able to keep them apart while it are two different kind of kitchens. Important to know is that the Indonesian cuisine is the real kitchen of Indonesia. This cuisine is miscellaneous because there are more than a hundred different islands in the archipelago in Indonesia. All those islands have their own cuisine and culture.

Indian cuisine has only known its origins since the colonial period of present-day Indonesia. The dishes of the Indies are adapted to the Dutch people. The Dutch also had a completely different taste development. They discovered the eating habits and products of the local population in Indonesia. When they returned to the Netherlands after the war, they also tried to prepare Indonesian food in the Netherlands. They started here Toko’s and eateries.

Instead of the exciting ingredients from Indonesia, Dutch products were used. The dishes were also adapted to Dutch taste. Dutch people don’t like sambal so they decided to skip this ingredient in the dishes. This combination of Indonesian and Dutch is called Indonesian cuisine.

A perfect example of an Indian dish is the rice table. This is a collection of different types of Indonesian food. In the past, this was only eaten by rich people, but today it is also increasingly common in the Netherlands. You will find the rice table on the menu in almost all the Indonesian restaurants.

The most seen international kitchen in the Netherlands is of course the Indonesian cuisine. A lot of people in the Netherlands have forefathers from Indonesia, who still live in Indonesia. Also a big part of my own family came from Indonesia to the Netherlands. So the Indonesian cuisine is mainly based on tradition and that’s the reason why there are many different versions of dishes. You could say it is a kitchen of family dishes. It doesn’t matter whether it’s breakfast, lunch, or dinner, Indonesian food is always a treat. If you decide to travel to Indonesia, I can advise you to look for real street food. Only then you will find the real authentic flavor of Indonesia.

The following dishes are an absolute must to try when you are traveling in Indonesia. I grew up with it myself and I can tell you that it is so much better than Dutch cuisine. Read where the dishes come from and how you should eat them. Maybe you already know a few!

Satay is meat, chicken, or fish on a stick and grilled on a charcoal grill or barbecue. A big difference between the satay in the Netherlands and the satay in Indonesia is that the pieces of meat are a lot smaller. One of the most famous variants of satay is satay Madura from the island of Madura, where chicken or pork satay is marinated for a long time and served with a peanut sauce with various ingredients such as sweet soy sauce, palm sugar, and kemiri nut. Not all types of satay are served with peanut sauce; Satay Padang (beef satay from West Sumatra), for example, has a yellow sauce made from rice flour, turmeric, galangal, and cumin. Satay kambing is made from marinated goat meat and served with a special soy sauce.

Rendang is an Indonesian dish from the Padang cuisine from Sumatra. It is often beef, but sometimes also chicken, 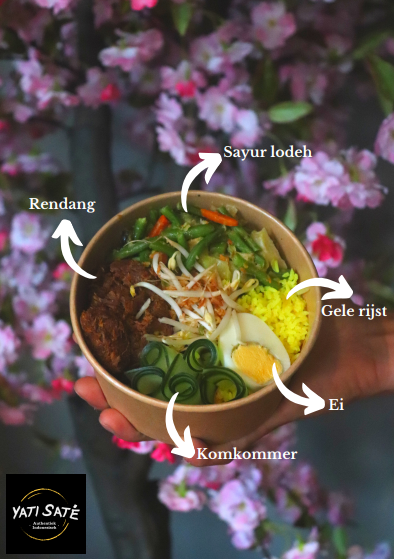 goat, or other kind of meat. They always cook the meat in coconut milk with a lot of typical Indonesian herbs. The cooking time takes about 4 – 8 hours. It cooks slowly because slow cooking allows the herbs to penetrate into the meat. The dish is cooked dry. Various spices such as fresh cinnamon and galangal leaves ensure that the meat can be stored outside the refrigerator for about three weeks after preparation. Rendang served outside of Sumatra has often been cooked for less time and thus not completely dry, making it more like a stew than a real rendang. Fun fact, rendang has been voted the most delicious dish in the world after a survey by CNN! Personally, this is also my favorite. Rendang tastes great as a main course, but it is also very tasty on a bun with some sweet and sour cucumber, also known as “atjar”. Rendang is Indonesian food at its best!

Nasi goreng is one of the most famous Indonesian dishes. The Dutch version of nasi goreng is more like Chinese white 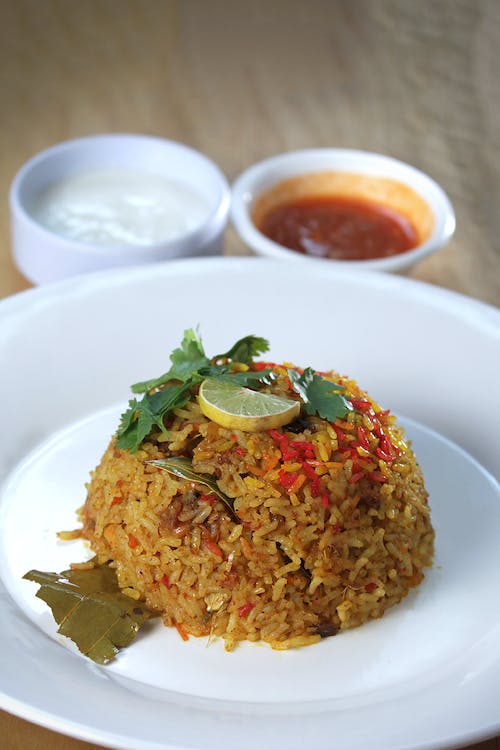 fried rice. The Indonesian nasi goreng is much darker and tastes different due to the soy sauce and trassie (a fermented shrimp paste). These are 2 typical Indonesian ingredients that are important for many dishes. Other ingredients include shallots, garlic, tamarind, and chili pepper. Nasi goreng has numerous versions, but the most common is the chicken, fried egg version, served with freshly baked prawn crackers. In Indonesia, a portion of nasi goreng without meat at a street food stand often costs about 10,000 rupiahs (converted € 0.70). Variants with, for example, chicken, goat meat, or shrimp are generally a bit more expensive.

Soto is the Indonesian name for clear soups based on fresh broth. The Soto is often eaten as a main dish (sometimes 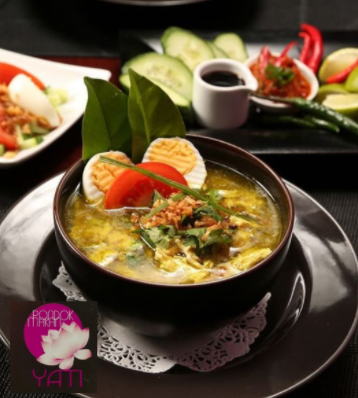 for lunch) and is always served with white rice. The rice is then served separately. The most famous Soto is Soto Ayam. Other variants include Soto ceker (with chicken feet), Soto Bandung from West Java (beef soup with soybeans and radish), Soto Betawi from Jakarta (beef soup with coconut milk, often with organ meat) and Soto Banjar from South Kalimantan (chicken soup with lots of spices such as nutmeg and cloves). In the Netherlands, we would say it is soup, but it is much more than that. If you are in Indonesia you almost owe it to yourself to give it a try, because it is amazing!

Gado-Gado is an Indonesian salad of different boiled vegetables with a boiled egg, potatoes, and a kind of spicy peanut 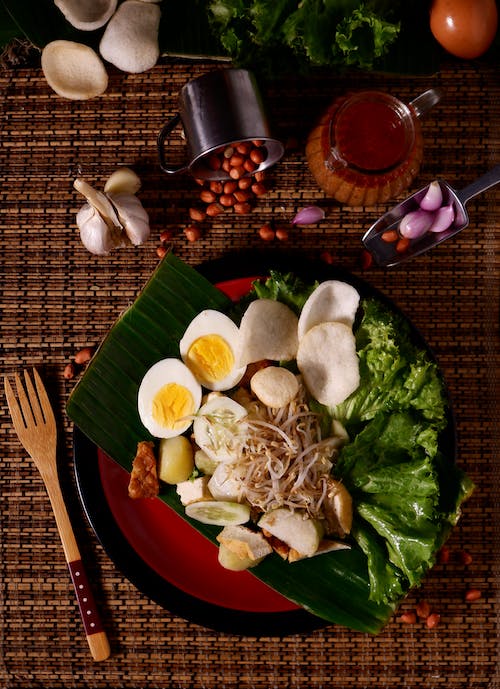 sauce. Gado Gado is often served with prawn crackers or emping (melindjo nut chips). It is also eaten with rice or with lontong (cubes of sticky rice). Gado-Gado originates in Jakarta (the capital of Indonesia), but there are many similar dishes from other regions of Java island. But as mentioned before, each family and culture has its own variations on dishes. The Javanese dish called Pecel (from East Java) is very similar to Gado Gado, but without egg and potato, and lime leaf is added to the sauce. In addition to cooked vegetables, Lotek (another version of Gado Gado) also uses some raw vegetables, such as tomato and cucumber. Kentjur (rhizome) is added to the sauce. Gado Gado is Indonesian food that you can see as a separate dish, but also as a side dish. Also nice to eat with satay.

Do you want to know more about Indonesia? Then you should definitely read our blog “the live in the mountains of Yogjakarta”